“An approach to the head of Ward Canyon where the most skiable terrain may be found. ” 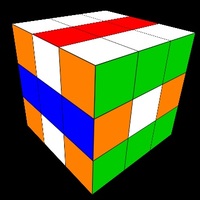 While making a transition to skin back up for another lap, I heard a sound getting louder and louder. Before I knew it, a motorcycle/snowmobile hybrid crested the hill below me, then another. They were kind enough to give me some space, but they sure made a stink of the air with those machines. If you visit this place, you may have to share it with snowmobiles.

Also, I made a really bad decision to exit via the Ward canyon bottom. This was a terrible mistake. Don't do it. It's best to reascend and ski the ridge back down. The only reason I made it back before sundown is because I knew the summer trail. Again, I do not recommend trying to use that trail. Just climb back out and ski the ridge back as far as you can, then boot it down the rest of the way.

Snow conditions on the ridge are not usually favorable as the gas pipeline is placed on a solar aspect. Watch out for wind-scouring and exposed rocks on the humps of the descent ridge.

Starting at Holbrook Canyon trailhead, boot up the north ridge of Holbrook Canyon until you're comfortable throwing on the skins, then skin up the gas pipeline. Likely you'll find snow on the ridge either too shallow to ski, or of such bad quality, that you'll fear trying. The snow quality does get better the higher up you go.

I stopped short of the last hump by dropping off a saddle and traversing to the north east (no skins.) This is fine if you think it's safe. There isn't too much exposure to steeper slopes above. As you traverse, glide as much as you can while maintaining as much elevation as you can. Occasionally sidestep up a bit to stay on a level as much as possible. Not too much side stepping is required. Once you reach a falloff point, start skinning up again and curve around south once you reach the plateau upon which Session's mountain road rests. Hike south until you reach the highest point connected to the gas pipeline.

Now you're ready to drop in. When you do, you can ski to your traverse, then ride it to your skin-up point where you already have a nice skin track waiting for you. That's how I did it, but I can see an argument for just hiking directly to the peak.

The terrain here isn't perfect, but there are a few open areas that may be fun. And you can also ski all the way down to the Tuttle Loop mine for a really long run. Getting back out from that, however, would require enough effort to make it all a one-and-done kind of trip. 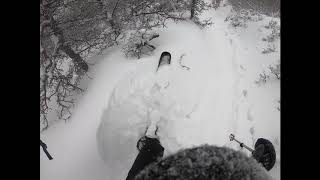 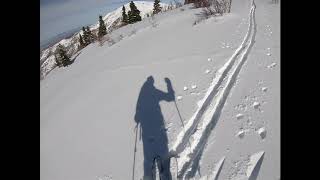