“Go get it skied before the darn Powder-Bird Guides do! ”

This is semi-steep powder skiing through the trees with occasional open shots, but it is very hard to access due to its remoteness in the backcountry.

About mid-way between Black's Peak and Grandview Peak sits north-facing terrain where a mine once lived. Often frequented by the Utah Powder-Bird Guides, you'll see lots of tracks in there, and maybe even a bomb hole, but there's enough terrain that you're probably still likely to find untouched powder-shots. By far, this is the best terrain I've ever skied off B-ridge.

The terrain is beautiful, remote, and steep. I wouldn't say it's terribly steep at all for skiing, but indeed yes for skinning. Approaching along the ridge from Black's Peak, then dropping in, if you want to regain the ridge, then be ready to make more zig-zags than Zorro on a PCP-fueled revenge kick. That is, unless you're one of those freakishly steep skinners of Wasangeles. I know people like that, but if you're like me, you're overweight, your skins are starting to fail, your heal-risers are too low, and you don't have enough surface area on the bottom of your ski. Thus, your skin tracks will be shallow with a mind-numbing number of switchbacks to regain the ridge. You'll do so many kick-turns, you'll be charley-horsing all the way home.

Going there alone (which I do not condone, nor recommend), I waited for the ava-rose to have been fully green for at least 3 weeks. Despite the prolonged dry-spell, this wind and sun-sheltered area preserved some excellent snow. Approaching from North Canyon under such conditions, you have to believe it will be worth it (and it will), because on approach, the snow will be pretty bad. This also means that your exit will be pretty tough too if going out the same way you came in, so plan accordingly.

I did not overstay my welcome at the Burro Mine. I knew that with only about 2.5 hours of daylight left, I needed to start back immediately.

The terrain in question here was once the site of a very large mining operation founded by Pierre & Leon Peugeot. 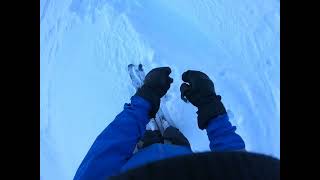