“A bike-to-ski tour of Grandview Peak. ”

Note that beyond a certain point, CCC is protected watershed, so no dogs are allowed.

A human-powered ascent of Grandview Peak in winter is difficult from almost any approach. In spring, it's a little bit easier by way of City Creek Canyon (or CCC, for short.)

Get yourself ready for a bike-to-ski tour! Starting at the CCC trailhead, bike about six miles to the end of the pavement where the Meadows Trail begins. This trail goes all the way to the GWT (Great Western Trail) at the head of CCC where it meets Hardscrabble Canyon. Lock and park your bike out of sight and begin skinning up the trail.

Now comes the tricky part. About a mile or less up the trail, you've got to turn left into the Cottonwood Gulch drainage. While in the canyon bottom, you lose all perspective, and you won't have any cell coverage to look at an online map. There are some landmarks you can use, but they're really only good for someone returning to the area after having scouted it out beforehand. Anyhow, you'll know you're on the right track if the going remains relatively open and at a low grade. (Other/wrong drainages will likely present more of a challenge.) Soon, things will really open up, and you'll get your first view of Grandview Peak while ascending its south-west bowl (Cottonwood Gulch.)

Be mindful of terrain traps, such as the natural half-pipe (as Owen puts it) running down much of the length of the gulch. Also, keep an eye on the temperature, and watch out for wet-slide activity on both flanks of the gulch. I think the west-facing flank might be more prone to wet-slides because it has more rocks that can heat up the surrounding snow, and it may be a bit steeper in most places.

From the saddle at the top of the gulch, it is a quick skin to Grandview Peak. Watch out for cornices!

At the end of the day, you'll be glad you can coast down the last six or so miles of CCC pavement to your vehicle. That is, if no one stole your bike. 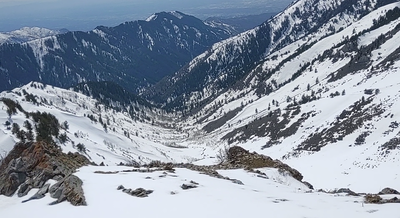 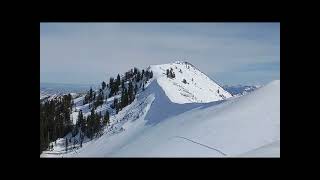