“On your return path you can also visit the Armenian Alphabet Monument, Hovhannavank, Saghmosavank. ” 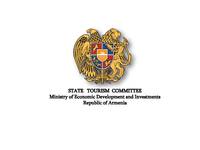 The Ucom and VivaCell-MTS networks are partially available in the territory of the trail. In case of emergency, call 911, a service available throughout Armenia.

Description of the Trail
To start this long ski trail, one should first get to the town of Aparan, in the Aragatsotn province. To reach this trail you must leave the town Aparan, and head toward the village of Kuchak, about 2km away. At the intersection, the trail starts. If the weather is clear and the road is passable you can go ahead and start walking on skis. Climbing a bit higher, you'll see the Ara, Teghenis 1 and Tsaghkunyac mountains. The routes is a long one, without any stops.

The Aragats Massif
Mount Aragats is considered the highest peak in Armenia (4,090m). It is an isolated shield-like massif of about 200km in circumference. Together with its fan-shaped slopes, it covers 4,000 sq. m, and is situated in both the Aragatsotn and Shirak provinces. Aragats used to be one of the world’s largest volcanos. It has a gigantic 400m-deep crater, 3km in diameter, and 4 peaks. The highest point is the North Summit- 4,090m; the West Summit is second with 3,995.3m and is followed by the East - 3,908.2m and South Summits- 3,887.8m.

Description of the Monument
The Holy Cross Church is situated in the town of Aparan, in Aragatsotn province. It was built at the end of the 4th century, and was renovated in 1877. The church received its name due to the relic of the Lord True Cross kept there. This chapel functioned till the 40's of the 20th century, i.e., even during the Soviet times.

Fauna
The winters on Aragats Mountain are long, cold and snowy. There is steady snow cover during 250 days of the year. In the apical zone, it is cold during the summer too. While traversing the trail you may come across wolves, foxes and wild rabbits.

Technical Specifications of the Trail
The best time: January- April
Yerevan is 56km away from the town of Aparan, so the road there takes 59m and costs 5,600-6,000 AMD (by taxi).
The distance of the ski trail is 13km.
The duration of skiing is 3 hours and 40min.
The area is located 1,750-2,795 above sea level.
The best drink to have on hand is warm tea.

How to Reach the Ski Trail
To reach the above-mentioned trail, you need to get to the town of Aparan, in Aragatsotn province. It is most convenient to travel by taxi. Taxi services are quite affordable throughout Armenia. We recommend taking a cab with a taximeter. 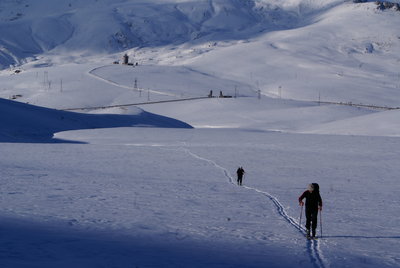