“A short but steep entrance into the Tyndall Gorge. ” 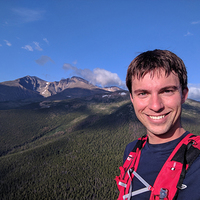 From Eli Helmuth: The Corral Couloir is a south-facing gash on the south side of Flattop Mountain very near the Continental Divide. Due to it's compact design and warm aspect, this couloir often has only MODERATE avalanche conditions in mid-winter and along with the steep entrance into the couloir, the "money pitch" of this descent is the deep powder typically encountered lower down in the Tyndall Gorge.

Although the couloir itself is a super fun descent, it is only about 500′ vertical to the bottom and it is really the skiing down the Tyndall Gorge that is usually the highlight of this tour. Skiing either down the center of the canyon on mostly 30 degree slopes or less is the safest and most cruiser choice.

Often, veering hard skier's right towards the North Buttress of Hallet's is where the best powder is to be found, especially directly below the imposing cliffs of Hallet's second and third buttresses, which often hold deep, untouched powder with some avalanche risk. These slopes are in the 35 degree angle range and prone to soft-slab formation and release, so good group management through this terrain is critical as is proper assessment before committing to a tour down this canyon.

Approaching the Corral Couloir is most easily done from the top by skiing up the Flattop Mountain trail from the Bear Lake trailhead (9,450′). Staying north on the above treeline flanks of Flattop often connects the snow better in this particularly wind-blasted area.

Just before reaching the Continental Divide and the nondescript 12,200′ summit of Flattop, there is a park-service built triangular hitching post which signifies the furthest a horse can be taken legally up this trail system. This is the obvious top of the south-facing Corral Couloir.

The cornice, which forms regularly on the western side of the entrance into the Couloir, is primarily a concern in the spring when this warm aspect is getting too much heat and the cornice is at its most unstable period. In these conditions, skiing the entire couloir in a pitch and getting out of it quick or taking breaks on the far-left skier's side on the descent should keep one out of the way of a partial cornice collapse.

The average angle of the Corral is around 45 degrees with some slightly steeper and less steep sections. Of course this is the perfect angle for slab and loose-snow avalanches and so considerable care must be taken in the decision-making process.

Late spring conditions and early winter conditions tend to be the best time for snow stability in this couloir although it's south-facing aspect keeps the snow a bit more bonded than other nearby areas and it is often wind-scoured. But slabs do form in this tight terrain and the runout from an avalanche to the bottom is into a boulder field which could be a painful if not deadly way to descend.

The Corral can be prone to heat-related avalanches and so early morning starts during the corn cycle are key and if the cornice is too much of a threat, the nearby Tyndall Glacier is the best alternative way to enter the Tyndall Gorge. 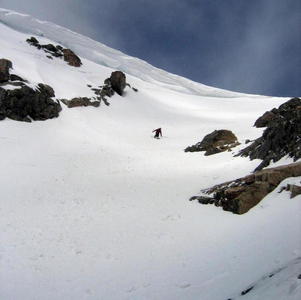