“This skis one of the best aspects available in Rocky Basin. ”

When everything else has bad snow in Rocky Basin, this line usually still holds good powder.

Tusken raiders may be camped out behind trees and rocks, ready to shoot at you as you ski by.

Having never ridden in a helicopter my entire life, I can tell you from personal experience that the best way to ski this line is...by using a helicopter. But if you don't have one of those, approach via Rocky Basin Exit. As the name suggests, its better use is as an exit to Rocky Basin.

The best way into Rocky Basin is via the Session's Peak Ascent, but this lands you at the peak. You'd have to ski the south ridge of the peak to get to this line, and there will surely be obstacles along the way, blocking the entrance.

Anyhow, I approached by just skinning right up the gut of Rocky Basin, then up the Session's Peak apron. I then left the apron heading skinner's right onto a west-northwest aspect into the trees. The northerly component of the aspect was the key here to the run holding better snow than anything else around. I skinned straight up the slope to the crown of the south ridge of Session's Peak. The skinning was very steep and difficult. Verts might have been a better choice. If ice-axe and crampons are the best way up to the top of the line, then you probably don't want to ski it anyway.

This is one of those one-and-done type of ski lines. You'll spend half the day getting to the top, then the rest of the day getting out. Despite the hardships, I still feel it was a rewarding experience.

Bring plenty of food and water. Make sure you're drinking and eating regularly. 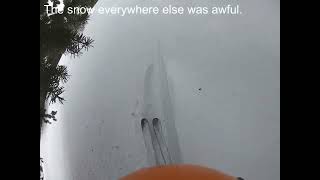 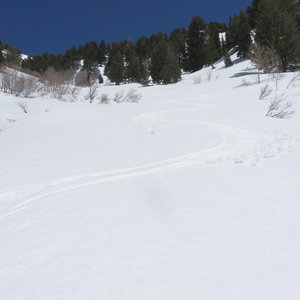