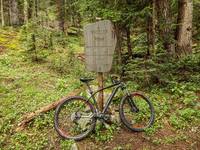 This is Class 3 avalanche terrain.

As with most of the west-facing lines on Wheeler Peak, the top of this one is usually wind-scoured and rocky. After a big snow event, it can be ridden from the summit; other times, the snow usually begins a few hundred feet down, and can linger until late May or into June on a great snow year.

From the summit, ride onto the open northwest slopes. There are two obvious lines, and you'll want to stay skier's left and to the north of a sub-ridge; follow the terrain as it gradually undulates and leads to a broad snowfield. This snowfield drops down to a rollover into a gully that runs west and narrows below treeline.

The gully funnels into a narrow channel, and then the terrain levels a bit. From here, the trees become tighter, and evidence of old avalanches can be observed in flagging high on the trees and debris scattered among the forest. Follow the terrain as it naturally leads to the open meadows above Williams Lake.

An R3D4 slide ran in this path during March 2010 after a moderate El Nino brought heavy snows to the area. A deep slab instability was present and a buried persistent slab failed on a layer believed to be surface hoar that likely grew between lighter snowfall events during late December or early January before heavy snows accumulated mid-January, February, and early March. This avalanche left a crown up to 12 feet high, debris ran hundreds of feet into the trees and flagging was visible several dozens of feet up. During early June of that year, there were debris deposits piled around the uphill sides of trees 6-10+ feet deep, after much of the snowpack had melted. This slide ran to about halfway between where the gully is visible in aerial images and the meadow above the lake, there is evidence of much larger slides that have made it all the way to the lake sometime during the late 1800s. 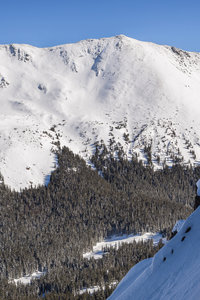 Dec 31, 2019
Daniel Chiu
The summit is very rocky and not enjoyable to ski.