“The signature peak for the Lick Creek Yurts, operated by Payette Powder Guides. ”

I rated this approach/climb "intermediate/difficult" because it is relatively short (less than 2.5 miles from the yurts), the vertical just under 2000 feet and there is no major exposure on the route. On the difficult side, the main chute is reasonably steep, around 40 degrees, there are avalanche risks and terrain complexities to be avoided.

This peak is easily reached from the Lick Creek Yurts. The ascent is fairly straight forward and involves an easy skin to the base of the main peak. We then put in some switchbacks up to a steep snowfield that is defined by a large cliff wall on climbers left. From there we bootpacked up along side the cliff wall to a saddle that put us on the south ridge. This allowed us to access the summit.

We chose this ascent route for several reasons:
1 - It appeared to offer the most protection from avalanches.
2 - It followed the approximate path of our planned descent.
3 - It was the most direct route that didn't involve any major terrain complexities and exposure.

The primary risk on the day that we climbed and skied this was the cornice that guarded most of the south ridge.

Note: There are many approach options along this stretch of Lick Creek Road. If you are not staying at the Yurts, the approach would more likely be from a point closer to where our descent ended - maybe even lower down. It is also important to note that winter access to this peak is either a very long skin in, (not practical for all but the truly insane), or via snow cat / snowmobiles.

The actual ascent that we did would still be attainable from any of the alternate approaches. 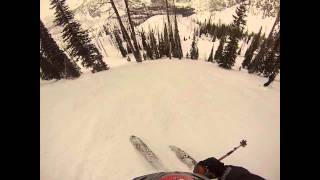 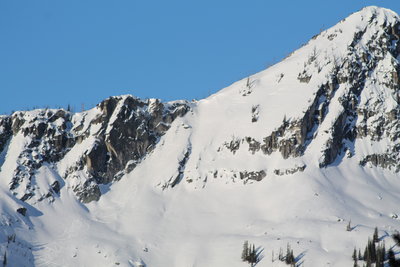 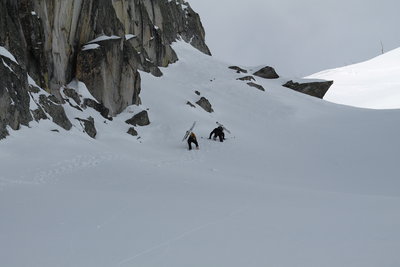