“An old avy path that makes for some great NE-facing tree skiing. ”

An easily approached line just outside of Frisco. This northeast aspect of Mt. Victoria holds soft snow many days after the last snowfall and can always be counted on for the goods.

There is parking at the top of 2nd Street in Frisco, and by the south exit from I-70. From either of these sites follow the rec path to access the Mount Royal Trailhead.

The routes and terrain described here are comprised of class 3 avalanche terrain—utilizing knowledge and standard protocol for backcountry travel is recommended as well as knowing how to assess localized snowpack conditions continuously during a tour.

Follow the Mt. Royal Trail up through the forest, past the junction with the Masontown Trail, and continue as it switches back through a stand of aspens and crosses the old slide path. After another switchback followed by a steeper section, it will take you below the saddle between Mt. Victoria and Mt. Royal. The Mount Royal Trail continues to the right, the Peak One Trail branches to the left and leads to the ridge ascending Mount Victoria.

During winter when the trail is snowbound, follow the cleared corridor through the trees until you reach the ridge, there may be some wind drifts that require class 3 moves to cut through the snow. Once on the ridge, find a suitable route up as you approach Victoria's high point, the west side is often wind scoured to dirt and sections of the summer hiking trail may be visible.

Near the top, the upper bowl and starting zone of the old avy path will come into view through some great, thin old-growth trees. This section of the ridge is heavily wind-loaded with cornices dropping into the northeast facing bowl. Stay right and above the cornices and top out amidst some surly Krumholtz pines.

The ridge levels and continues south towards Peak One, the J Chute is just over the rollover to the northeast. From there, staying to the skier's right side of the chute will provide some awesome tree skiing with less avalanche danger. Dropping straight into the chute follows the point-release path down gradually opening terrain with a few cliffs. To skier's left is the broad, treed bowl visible from Frisco that drops into the J Chute's main path.

At the bottom of the avalanche path is the site of the historic mining camp Masontown. After the mines had busted and Masontown had been abandoned for several years, an avalanche during March 1926 destroyed the remaining structures left by the miners. The slide path had been known however had not ran this far; this slide happened after heavy spring snows brought a deep snowpack, and it cleared out the bottom of the chute so it now looks like a J from Frisco and across Dillon Reservoir. There have been a few large, natural R4D4 slides in this path during the past few decades, notably one during March 2003 buried the Mt. Royal Trail and again during the heavy snowfall season of 2010-11 there were several large storm slides that hit the trail. It is not uncommon for snow depths in the starting zones to be 20-30' deep after a strong winter. 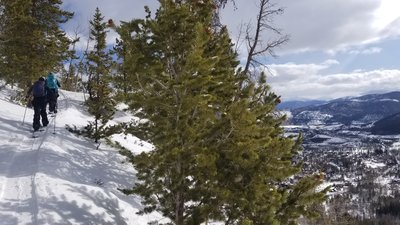 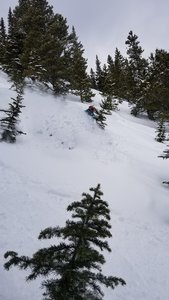 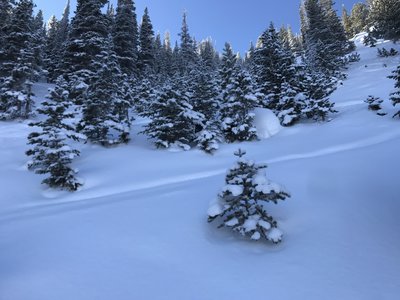 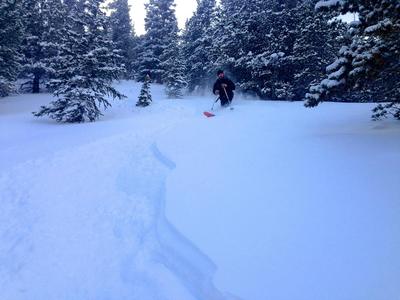 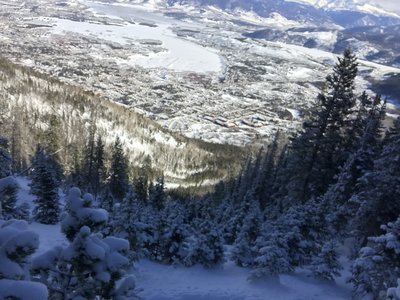