“This is the more direct, adventurous route to Session's Peak. ”

I highly recommend having crampons and ice-axe for the technical part of the ridge. This is the last quarter mile before the summit.

Alternatively, you could drop into Holbrook Canyon, then hike east to the Great Western Trail, then follow that all the way to the ridge, then leave it heading west to the peak.

Starting at Mueller Park, hike up the center of the canyon on the paved road which turns to dirt before you find where the gas pipeline crosses the canyon. Take a left here heading north up the gas pipeline. It begins very steep, but tapers eventually. You can follow it all the way to the top of Session's ridge, but you'll find it more convenient to leave the gas pipeline the moment it takes a sharp dip downward.

Rather than lose that elevation, turn right and head northeast up what will become a vast snow-field. It will feel like you're on an ocean of snow as you look in all directions as you're skinning and feel as if you're going nowhere. But don't give up.

Eventually, you'll crest the ridge, at which point, head east over the bumps and obstacles, careful to avoid cornices, until you reach the summit.

Along the way, you'll notice a lot of tempting terrain dropping into Holbrook Canyon, and that of Rocky Basin, the former having generally better snow due to the northern aspect.

This approach is much faster than Session's Peak Ascent, but is not as ski-able on the way back down.

Note that while ascending the pipeline, take time to look behind you and experience the awesome views of Bountiful Ridge. 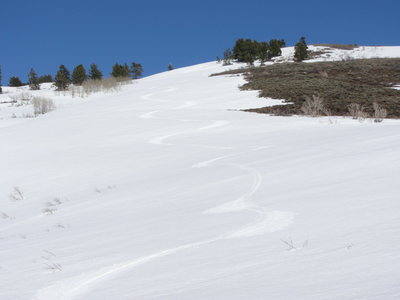 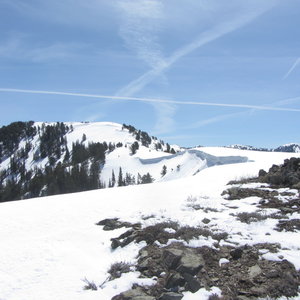