“Linking up the 4 official Mosquito Range 14ers in a day. ”

Fun long tour with a decent amount of vertical gain, some long quality descents, and straightforward routefinding. This is a 20 mile, ~9,000 vertical foot, 12 hour outing (or it was for us)

The route is best skied as we did it: south to north in order to avoid skiing sun affected slopes. Crampons may be useful.

Start by setting a shuttle at Montgomery Reservoir on the Northeast side of Mt Lincoln. Then travel back through Fairplay and South on US 285 to 4 Mile Road. Take this to the snow closure. A high clearance 2WD vehicle should have no problem.

From the trailhead ski up the drainage towards Mt Sherman aiming to ascend the east face to the vicinity of the summit. This keeps you off the ridge and out of the wind. You'll probably have to boot up the final headwall. From the summit of Sherman, drop slightly to the northeast, then head north towards the twin peaks of Mt Gemini, aiming for the snowy shoulder to the east of the right (east) summit. From the shoulder, descend moderate slopes into the large valley of Sacramento Creek, aiming for the gentle saddle between Mt Evans and Pennsylvania Mountain. You should be able to skate this out without resorting to skins.

From the saddle, aim for the next saddle to your north between Kuss Peak and London Mountain. You'll be able to get about half way there before you need to put skins back on. This is a long slog over gentle terrain.

From the Kuss-London saddle, descend staying as high and left as possible to gain the upper basin in which Mosquito Creek flows. Skin up and aim for the point where the ridge from Mt Tweto begins to ascend Mt Buckskin proper. Crampon up to the ridge and take it to the summit of Buckskin.

From the summit, scope out Mt Democrat and find your preferred route of ascent. When looking at Democrat's south face, we selected the couloir on looker's left which takes you through the mid slope cliff bands and deposits you on the south ridge.

There was good skiing off of Buckskin, a little traversing, and a boot pack to looker's left that will get you to a shoulder with great turns taking you down to the bench where you'll traverse to the couloir. Skin over to and up the couloir with a little boot pack probably necessary to exit the couloir and ascend the ridge for a little until the angle eases. Then skin to the summit.

From the summit of Democrat, look over at Mt Bross and identify the left of two gullies ascending its west face. This is what you'll ascend.

Drop off Democrat's east-northeast aspect for a long descent to a contour run around upper Kite Lake Basin, aiming for the gully. Skin up the perfect angle of the gully until the angle steepens and the snow possibly gives out. Hike up and left to the summit.

From the summit, ski and probably hike towards the Bross-Cameron saddle and either tag Cameron (we did not) or contour around to the final ridge up Mt Lincoln. This will likely be mostly skinning with some hiking. Descend from Lincoln back to your car. We elected to ski the north couloir off of Mt Lincoln but Lincoln Amphitheater or any descent to Montgomery Reservoir also works. 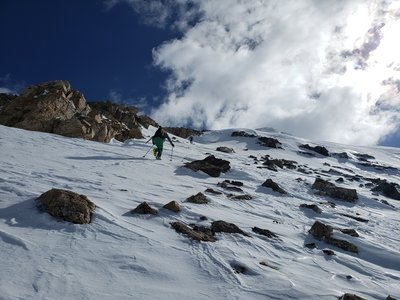 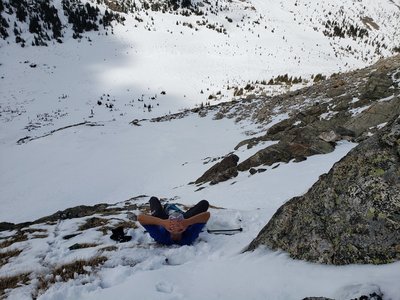 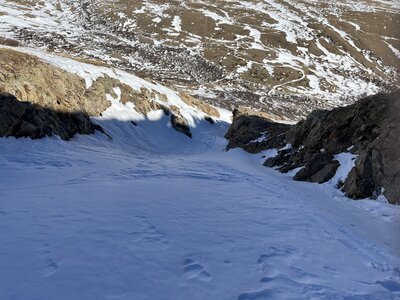 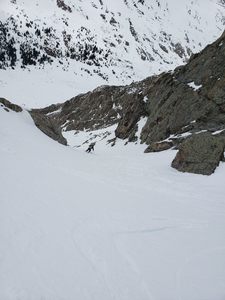 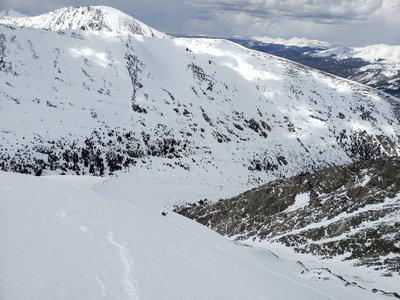